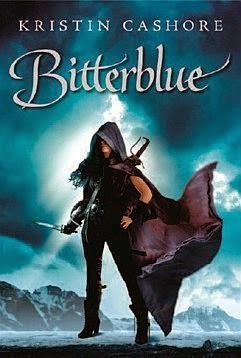 Some weeks ago, I was wondering when had been the last time a book had made me cry. George Orwell’s1984(which is, without a secret, my favorite book—I even have two tattoos to prove it!) made me cry. Harry Potter and the Prisoner of Azkaban made me cry. Same forTo Kill A Mockingbird.

And then, there was Bitterblue.

I loved Graceling. I didn’t care much for Fire, but it was a nice book. I absolutely loved, loved, Bitterblue and I didn’t want it to end. And, when it did, I felt so overwhelmed with emotion, so touched by the subjects Kristin Cashore had visited in her third novel (and identifying with some of them) that I couldn’t stop the awfully embarrassing tears from prickling my eyes.

But let’s start at the beginning, shall we?

If you’ve read the previous two books, you remember Bitterblue. She was a small, ten-year-old girl then, running from her tyrannical father Leck. Eight years afterwards, the third installment of The Seven Kingdoms starts and she’s grown into a smart, curious queen. Feeling out of the loop when it comes to her royal business, she escapes into the city at night and stumbles upon a story house. There she hears various stories—some about her horrible father,—and meets Teddy, a printer, and Saf, a graceling who doesn’t know what his power is.

Balancing her covert identity and her knowledge about politics, Bitterblue soon discovers that her advisors had been lying to her. Among other things, she thinks almost everyone is literate in her city, while it’s the complete opposite. I don’t want to get much into details as I don’t want to spoil the amazing intricacies of the plot, but I’ll tell you this: it’s not just about Bitterblue’s escapades at night and, behind everything lie tons of horrible secrets Bitterblue wants to unravel… And they’re worth every page you read.

In Bitterblue, everything is connected. Old characters return in an amazing fashion (particularly Fire), characters you might overlook become important when you least expect them and character who’ve endeared themselves to you in the beginning start not to matter much. But, like the title says, the novel is about Bitterblue and, while you might think it’s not enough… it is. Bitterblue is an amazing, strong character and by the end of the book I wanted to know more about her. The romance in the book suffers from it, but the resolution is so bittersweet, and so true to the characters that my heart ached in response.

And then, the end. Everything culminates at the end of the novel and that’s where I lost it and cried like a baby. There’s closure to almost every aspect—and I say almost because I hope Kristin Cashore writes more about Bitterblue and resolves certain relationships. It’s not that they ended badly or anything, it’s just… It was so good, so beautiful, that I want more.

The writing is, as Kristin Cashore’s writing has been in the first two novels, flawless. Her handle on vocabulary is stellar and she evokes imagery without even trying. But what sets this novel apart from the other two is the complexity of the plot. Bitterblue’s machinations are so beautifully intricate, sometimes wonderfully perverse that I had trouble stopping myself from reading more so I could go to bed.

I could go on and on about how much I loved this book. I really could. But I’m afraid I’d just spoil you, so I’ll just shut up and tell you to read it. Bitterblue is a wonderful, complex, riveting read and the emotion I felt at the end is the proof of it. Please, please read it and give Kristin Cashore the recognition she deserves.