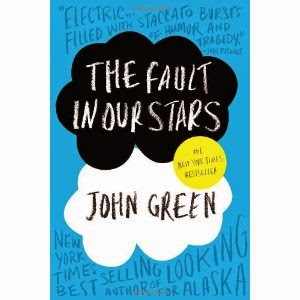 Despite the tumor-shrinking medical miracle that has bought her a few years, Hazel has never been anything but terminal, her final chapter inscribed upon diagnosis. But when a gorgeous plot twist named Augustus Waters suddenly appears at Cancer Kid Support Group, Hazel’s story is about to be completely rewritten.

First things first: I was a bit reticent with this book. Cancer-kid stories are often depressing with no uplifting moments. Then my dear big sister from College (it’s a hazing thing—she’s the person I chose during hazing week to be my mentor/friend throughout the course and she has not disappointed) told me it was amazing and that I should read it. So, I did. I got the book, started reading it after dinner and couldn’t bear to go to bed without finishing it. It’s that good.

The Fault In Our Stars is the recipe of a tear-jerker: the main character, Hazel, is terminally ill, her love interest is a cancer survivor, his best friend loses both eyes to cancer… You know it’s going to end badly, and it does—but not in the way you’d expect.

The book is in first-person, narrated by Hazel Grace. Hazel almost died some time prior to the book, but some trial drug kept her tumors from growing and now, she’s sort of stable and walks around with an oxygen tank at all times because, as she puts it, her lungs suck at being lungs. Her parents make her go to a Cancer Kid Support Group and there she meets one-legged Augustus Waters, who is going to flip her world upside down.

Hazel and Augustus practically fall in love right off the bat. Normally, I’d complain about insta-love, but let’s be fair: at times, insta-love is a valid writing resource, especially in a stand-alone novel. And in this case, it’s so cleverly done you really don’t mind that the main protagonists are basically head over heels with each other within the first third of the book.

Now that we’ve got the main story down, I’m going to talk about Hazel and Augustus. I said earlier that cancer-kid books are often depressing and have no light moments. Well, The Fault In Our Stars is not like that. Hazel has cancer and yeah, it’s pretty awful, but she’s been living with it for so long that she accepts it as a part of her. She doesn’t mope around a lot and say how much her world sucks. Instead, she’s a deliciously sarcastic person who makes the whole cancer deal seem a secondary aspect of her life she has been saddled with. Sure, she has to sleep attached to a machine and has to bring her oxygen tank everywhere—but she makes those complications seem minor in comparison to everything that’s going on in her life. She’s smart, well-read and very compassionate and the perfect narrator to this great novel. And most of all: she isn’t a teenager pretending to be an adult. She’s a teenager being a teenager, tantrums and all, and the fact I don’t hate her as I do most characters who behave that way is something to behold.

As for Augustus… his character is amazing. You see that he truly likes Hazel and he does show it. He does everything he can to make her wish come true, and it’s the sweetest thing. He does not do it so that he can have some measure of power over her: he does everything he does because he loves her. The secondary cast of characters: the fictional author Peter van Houten is a full-fledged jerk, Hazel’s parents are a mix between overly concerned and wonderful, Isaac, albeit a somewhat background character, has a great story… They’re all wonderful and you grow to care about them all when everything unfolds.

I fell in love the way you fall asleep: slowly, then all at once.

Without pain, how could we know joy? This is an old argument in the field of thinking about suffering and its stupidity and lack of sophistication could be plumbed for centuries but suffice it to say that the existence of broccoli does not, in any way, affect the taste of chocolate.

You don’t get to choose if you get hurt in this world…but you do have some say in who hurts you. I like my choices.

It’s beautiful. I haven’t read a book that is so short and so filled with memorable writing. It’s also John Green’s flawless prose that brings all these characters to life and it’s a wonder to read.

Finally, you have the end. There’s a point in the book where you know for sure (because until then you will be hoping otherwise) there’s not going to be a happy ending. It’s a tragedy, true and raw, and you feel so helpless you want to stop reading but at the same time you can’t because everything is so carefully worded, so wondrously put together you want to see how the author is going to make the inevitable happen. And when it does, it’s the most beautiful, heartbreaking thing I’ve read in a while.

I’m not kidding when I say this: when I had about forty pages left in the book, I was crying every five minutes. I had to stop reading so I could cry. My boyfriend, who was Skyping with his colleagues for a college project had to turn off the microphone so no one would hear my constant sobbing. And when I read that final sentence, I cried some more, re-read the last chapter, cried again, re-read it… It was a funny thing, how I didn’t want the book to end like that and, at the same time, how I felt the ending was perfect.

I whole-heartedly recommend this book. It’s one of those books that’s so wonderful you feel it’s your personal quest to tell everyone to read it. I’ve heard complaints on the internet about how every John Green book is the same, how he is the Nicholas Sparks of Young Adult—and I don’t care. Nothing is ever going to diminish my opinion of this novel: that it’s a beautifully told, beautifully written story I want to read over and over again.