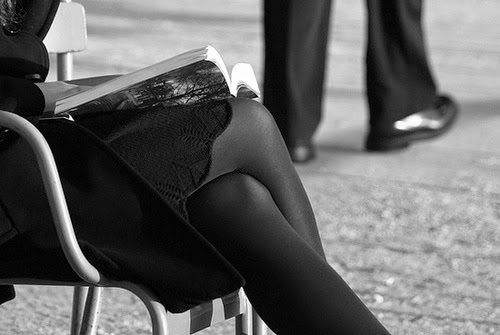 You should date an illiterate girl.

Date a girl who doesn’t read. Find her in the weary squalor of a Midwestern bar. Find her in the smoke, drunken sweat, and varicolored light of an upscale nightclub. Wherever you find her, find her smiling. Make sure that it lingers when the people that are talking to her look away. Engage her with unsentimental trivialities. Use pick-up lines and laugh inwardly. Take her outside when the night overstays its welcome. Ignore the palpable weight of fatigue. Kiss her in the rain under the weak glow of a streetlamp because you’ve seen it in a film. Remark at its lack of significance. Take her to your apartment. Dispatch with making love. Fuck her.

Let the anxious contract you’ve unwittingly written evolve slowly and uncomfortably into a relationship. Find shared interests and common ground like sushi and folk music. Build an impenetrable bastion upon that ground. Make it sacred. Retreat into it every time the air gets stale or the evenings too long. Talk about nothing of significance. Do little thinking. Let the months pass unnoticed. Ask her to move in. Let her decorate. Get into fights about inconsequential things like how the fucking shower curtain needs to be closed so that it doesn’t fucking collect mold. Let a year pass unnoticed. Begin to notice.

Figure that you should probably get married because you will have wasted a lot of time otherwise. Take her to dinner on the forty-fifth floor at a restaurant far beyond your means. Make sure there is a beautiful view of the city. Sheepishly ask a waiter to bring her a glass of champagne with a modest ring in it. When she notices, propose to her with all of the enthusiasm and sincerity you can muster. Do not be overly concerned if you feel your heart leap through a pane of sheet glass. For that matter, do not be overly concerned if you cannot feel it at all. If there is applause, let it stagnate. If she cries, smile as if you’ve never been happier. If she doesn’t, smile all the same.

Let the years pass unnoticed. Get a career, not a job. Buy a house. Have two striking children. Try to raise them well. Fail frequently. Lapse into a bored indifference. Lapse into an indifferent sadness. Have a mid-life crisis. Grow old. Wonder at your lack of achievement. Feel sometimes contented, but mostly vacant and ethereal. Feel, during walks, as if you might never return or as if you might blow away on the wind. Contract a terminal illness. Die, but only after you observe that the girl who didn’t read never made your heart oscillate with any significant passion, that no one will write the story of your lives, and that she will die, too, with only a mild and tempered regret that nothing ever came of her capacity to love.

Do those things, god damnit, because nothing sucks worse than a girl who reads. Do it, I say, because a life in purgatory is better than a life in hell. Do it, because a girl who reads possesses a vocabulary that can describe that amorphous discontent of a life unfulfilled—a vocabulary that parses the innate beauty of the world and makes it an accessible necessity instead of an alien wonder. A girl who reads lays claim to a vocabulary that distinguishes between the specious and soulless rhetoric of someone who cannot love her, and the inarticulate desperation of someone who loves her too much. A vocabulary, goddamnit, that makes my vacuous sophistry a cheap trick.

Do it, because a girl who reads understands syntax. Literature has taught her that moments of tenderness come in sporadic but knowable intervals. A girl who reads knows that life is not planar; she knows, and rightly demands, that the ebb comes along with the flow of disappointment. A girl who has read up on her syntax senses the irregular pauses—the hesitation of breath—endemic to a lie. A girl who reads perceives the difference between a parenthetical moment of anger and the entrenched habits of someone whose bitter cynicism will run on, run on well past any point of reason, or purpose, run on far after she has packed a suitcase and said a reluctant goodbye and she has decided that I am an ellipsis and not a period and run on and run on. Syntax that knows the rhythm and cadence of a life well lived.

Date a girl who doesn’t read because the girl who reads knows the importance of plot. She can trace out the demarcations of a prologue and the sharp ridges of a climax. She feels them in her skin. The girl who reads will be patient with an intermission and expedite a denouement. But of all things, the girl who reads knows most the ineluctable significance of an end. She is comfortable with them. She has bid farewell to a thousand heroes with only a twinge of sadness.

Don’t date a girl who reads because girls who read are storytellers. You with the Joyce, you with the Nabokov, you with the Woolf. You there in the library, on the platform of the metro, you in the corner of the café, you in the window of your room. You, who make my life so goddamned difficult. The girl who reads has spun out the account of her life and it is bursting with meaning. She insists that her narratives are rich, her supporting cast colorful, and her typeface bold. You, the girl who reads, make me want to be everything that I am not. But I am weak and I will fail you, because you have dreamed, properly, of someone who is better than I am. You will not accept the life of which I spoke at the beginning of this piece. You will accept nothing less than passion, and perfection, and a life worthy of being told. So out with you, girl who reads. Take the next southbound train and take your Hemingway with you. Or, perhaps, stay and save my life.